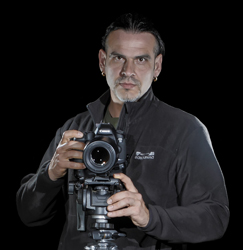 I was born in Salamanca (Spain) in October 1970 and since very young awoke in me a passion for nature and especially by the wildlife. With this intention I got into the beautiful and complicated world of nature photography that gives me so much satisfaction when I put me behind the viewfinder of my camera.

In recent times since the revolution of digital photography, much of my dedication to nature photography is based on experimented with complex and creative photography technics as high speed with flashes, combinations of technical skills in a single shot as long exposures next to high speed or doubles approaches always including animals in full freedom in the image.

I like to show special moments, those moments in the animal's life that many people have never seen. If with my pictures someone learns to respect and preserve nature, I would be satisfied.

The photographer has been awarded many times in national and international competitions among which: