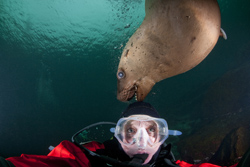 For more than thirty years, Paul Souders has traveled around the world and across all seven continents as a professional photographer. His images have appeared around the globe in a wide variety of publications, including National Geographic, Geo in France and Germany, Time and Life magazines as well as dozens of publishing and advertising projects.
His recent work in the arctic has drawn wide acclaim, including first place awards at the BBC Wildlife Photographer of the Year competition in 2011 and 2013, as well as the National Geographic Photo of the Year contest in 2013.