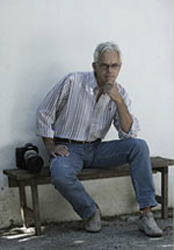 Someone wrote ‘You can take the man out of Africa, but you can't take Africa out of the man’. This is exactly what happened to Thomas Dressler when he travelled for the ﬁrst time to Africa in 1985. Two years later he trated his career in the tourism industry of Europe for the endless African savannas. Photography was a path that not only allowed him to follow that dream, but also gave him the possibility to explore the great continent — and make ends meet. This bold step paid off and when he returned to Europe following two expeditions to Africa in 1987 and 1988, his photography was met with much enthusiasm and interest. Today, his work has taken him to the far-ﬂung corners of Africa. The most memorable and rewarding of these being Namibia, with its rural and urban landscapes, its extraordinary wildlife and its remarkable people.