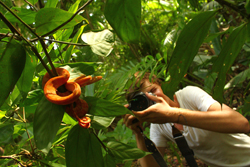 Born in 1993, Quentin Martinez, a wildlife photography enthusiast, took interest in entomology at an early age, first of all by collecting insects, then by creating insect farming for informative purposes. That way he timidly followed the steps of Henri Fabre, the famous naturalist.

Quickly, his cricket and cockroach farming were used to feed ophidians and tarantulas, his hamsters were used as food for snakes and other reptiles, until batrachians appeared in his life: tree frogs, horned frogs and dendrobates…

This interest for amphibians didn’t stop growing over time and that is why he now only observes them in their natural habitat by capturing with his camera moments stolen from their hidden lives. Hours of waiting to catch the gaze of a viperine snake, an infrared barrier to seize the leap of a tree frog, underwater diving to come upon the mating of toads… Quentin knows how to use multiple devices and means.

Currently living in French Guiana for his environmental studies, he wishes to carry on and to intensify his works regarding these cold-blooded animals that are, for a large number of them, still little known to this day.