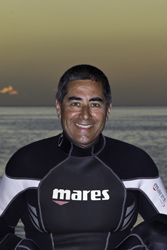 Franco has home in the southern part of Switzerland, in a cosy village close to Lugano Lake.
He is one of the most appreciated photojournalist specialized in underwater subjects and stories.
Franco began to dive in the 1981, in the Lake of Lugano. At the beginning, he dived the fresh waters nearest home, especially lakes and rivers, where the water is clearer and he was able to improve his photographic technique.
Then he travelled everywhere he could, documenting wildlife and human relationship with nature in environments from the Equator to the Poles.
Franco dived in all the oceans of our Earth : Pacific Ocean, Atlantic, Indian, Arctic, Antarctic, Mediteranean Sea, Red Sea, improving his skill as photographer and his love for wildlife and conservation of biodiversity, flora and fauna.