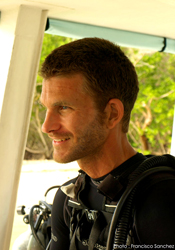 Mathieu Foulquie is a marine biologist, a self-taught photographer and he has been a professional diver for 33 years, recently “converted” to closed circuit rebreather.

I have been taking part in numerous missions and scientific expeditions around the world for many years: Glorioso Islands and Banc du Geyser in the Indian Ocean, searching for antitumor molecules in marine invertebrates (2003-2004), Clipperton Atoll in eastern Pacific with Jean-Louis Etienne (2005), Syria and Algeria in the Mediterranean on the behalf of the United Nations Environment Programme (UNEP) (2002-2004).

In addition to that; Jordan for an eco-development mission in Aqaba Marine Park (2002), South Africa as a still photographer on the shooting of Jacques Perrin’s movie “Oceans” (Galatee films production, 2009), in 2005 and a report in British Columbia (2006).

The destinations that are more “personal” and close to my heart are Cuba and Vietnam.