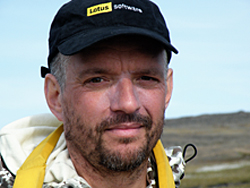 Born in 1961, Pierre Vernay has been fascinated by photography and northern territories for 18 years. He has travelled for the past 40 years across all the territories of the High North that mark out the Northwest Passage, Greenland and Spitzbergen (the Northern Sea Route). He has experienced extreme cold, violent storms, hunger and so he can grasp the sufferings and dreams of the explorers of times gone. He is the author of several books about the Arctic and his pictures have also been published in the most distinguished French and international magazines. Moreover, his polar expeditions gave him the opportunity to direct several films for the Ushuaia TV channel.

He enjoys mingling with nature and confesses that he takes as much pleasure in taking the picture of a squirrel in a forest in France as in taking one of a polar bear on an ice floe or even a tiger in an Indian forest. Of course the excitement is not the same, but it’s only the beautiful picture that matters in the end!

He holds a special affection for the Arctic, felines, the forest world and European top predators.

Pierre Vernay exhibited some of his most beautiful pictures of the Arctic in 2007 during the Wildlife and Nature Photography Festival of Montier-en-Der.

Awarded at the Wildlife Photographer of the Year - 2010