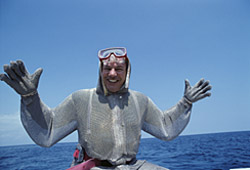 Jeff Rotman is one of the world's leading underwater photographers. Born in Boston, Massachusetts in 1949, he learned to dive and began shooting underwater 42 years ago in the cold, often murky waters of the North Atlantic. Relentless in his pursuit of perfection, he combines an artist's eye with a naturalist's knowledge of his subjects. The result is a unique and inimitable assortment of images that blur the line between art and science. A recent review of his work noted, "Among fellow photographers, naturalists, and divers, Jeffrey L. Rotman is widely regarded with awe, so difficult is his specialty, so great is his mastery of it." His work has been featured on television and in books and magazines worldwide, including Life, Time, Smithsonian, The New York Times, National Geographic, Geo, Stern, Paris Match and Le Figaro. Jeff is also the author of twenty-three successful books. Among his recent honors, Rotman was recognized as the BBC "Underwater Wildlife Photographer of the Year" and was awarded First Place in the prestigious photojournalism competition sponsored by the American National Press Photographers' Association and the University of Missouri School of Journalism.