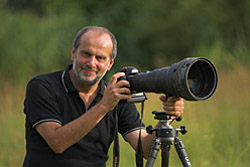 Berndt Fischer, a former professor of German Literature, has been a professional photographer for more than thirty years. His favourite subjects are animals along with humans, not forgetting natural and urban landscapes.
Several of his photography books have been published in Germany, including one on Paris, where he lived during 3 years, on nature in Bavaria, where he was born and still lives to this day. With his book on the tropics entitled “Colours of the Tropics”, published in 2008 both in German and English, he illustrates the Latin American, Southeastern Asian and African ecosystems. Numerous German magazines have also published his features, favoring animals in natural atmospheres and « untouched » landscapes.
His latest project is an account on nature in the German regions and the countries in Esatern Europe that used to be separated from the West by the iron curtain. Shreds of preserved nature can be found in these border areas. The results of this work have been gathered up in the book “The Green Roof of Europe” and in an exhibition in German and Czech currently happening in the Bayerischer Wald National Park.