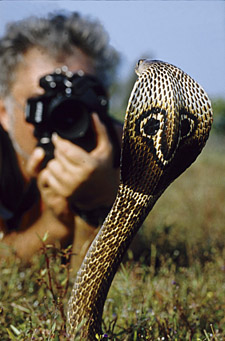 Daniel Heuclin found himself face to face with some of the most venomous snakes and that’s what he likes, coming closer and closer to those crawling species to capture THE picture. For this 35 years travelling around the world, the French photographer collected more than 500 000 pictures on animals, ethnic peoples and primitive tribes, but snakes remains his favorites.

"Photography gave me the opportunity to travel, see snakes and a lot of animals, that’s what I like"

« My mom told me that I once caught a snake when I was 2 years old, yet I don’t even remember. I began having interest in snakes when I was 7. I was visiting zoo and I read books on it too. »

His dad didn’t want him to have one in their house and Daniel moved to Paris when he was 21. There he cared for snakes, pumas and crocodiles. He started travelling as often as possible to capture animal photographs in their natural environment.

Daniel Heuclin’s self-control when he faced dangerous animals shows how able to capture close-up on venomous species he is.

« the secret is to stay still no matter what. Snakes can’t see very well but have an amazing movement perception. »

Now Heuclin is living in the countryside near Poitiers, France. He catches and breeds reptiles and amphibians to shoot them and study their behavior. He has a permit to breed venomous reptiles, amphibians, mammals and spiders. In his miniature zoo, he has a lot of species including cobras, rattlesnakes, vipers, king snakes, pythons, boa constrictors, and some lizards, iguanas, chameleons, and crocodiles, a Gila monster, tarantulas, prairie dogs, foxes and turtles.

« I’ve got around 500 animals at home but the number isn’t regular as some are dying and born. I catch animals to capture moments all through their lives. I learn a lot on their fascinating behavior, their way to mate, and their eating patterns. It’s not easy to film a snake eating its prey in nature. Once I’m happy with my pictures, I free the animal. »

Heuclin was one of the founder of the French Organization for herpetology in 1977. Every year he organizes a lecture on venomous snakes and shows his photographs at the Natural History Museum in Paris.

Daniel Heuclin is motivated with his passion to capture animals whose life is threatened by human craziness.

”I want to show the essential relationship between Men and Nature and that the existence of both of them is slightly linked”.