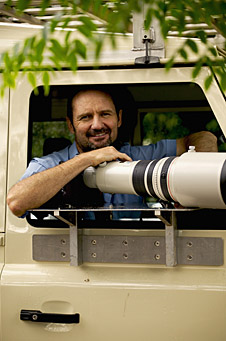 Martin has a biology and conservation background and worked for the National Parks in Zimbabwe and South Africa before eventually becoming a professional wildlife photographer in 1993.

He has photographed in over 43 countries around the world, from the Arctic regions of North America to the deserts of Australia. However the last few years have been largely confined to photographing endangered species and remote travel locations in Africa for several upcoming books.

His photos have been published in magazines and books throughout the word and include publications such as National Geographic World, BBC Wildlife, Geo, Natural History, International Wildlife and many others. Martin is frequently commissioned by The World Wide Fund for Nature to cover conservation projects and has photographed species such as tigers in India and gorillas in Central Africa.