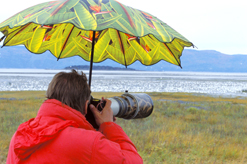 He is travelling around the world several months a year looking after fauna, flora and landscapes.

He favors great free spaces and often stays in North Canada, Alaska, in Southern Africa and in the Falklands Islands.

His travels let him live together with nature and appreciate all its frenetic but also to respect all its strength.

His pictures are published in France and abroad and he has been awarded in international contests for nature photographs: Montier-en-Der in 2011, Namur in 2015, the International Photography Awards in 2015, the GDT in 2016 and BBC in 2016 as finalist for the public prize.