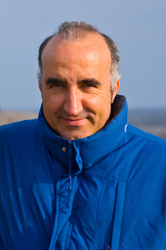 Juan Carlos Munoz is one of the most important wildlife photographer of his time. The authenticity of his works can be found in the main Spanish newspapers and magazines. His work is the base of a few known books, and also of books he co-wrote. He also appears in calendars, posters, ads, and postcards. He was born in Bilbao in 1961 and studied biology at university. As soon as he got his diploma, his interest for ecology and the very heart of nature brought him to photography, as a way to express what he was and to achieve something.

As he was working as a independent photographer since 1990, he went all around the world, from North to South, jumping from continents to islands and from islands to the sky. He used his knowledge of the environment to transcript the still spirit of nature in wonderful photographs. Through very personal landscapes, and through every animal, he brought a wonderful vision of what those places really are.

Being a photographer made him travel all around Spain. He also went through America and dug in the African roots, than moved to Asia to capture the peacefulness and also went Antarctica, New Zealand or the Artic Circle. In a nutshell, he put his huge passion in his photographs: the natural spirit of Mother Nature.