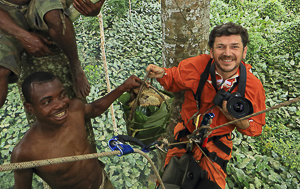 Eric Tourneret has been an independent photographer since 1989 and is now reputed to be the « the bees photographer ». He is currently living in Ardeche, France.

His awareness among beauty of natural landscapes is due to him growing up near Annecy, between the lake and mountains. When he turned 17, he discovered Africa, being on a journey, desert, and met new cultures. He got introduced to photography working in studios with fashion or advertising photographers who were specialists of light and visual creation. He then travelled the world for fifteen years bringing back ethnics or social reports for magazines. Photography was a “tool to tell”, “a tool to get to meet new people”.

In 2004 as he learnt that bees were disappearing (thanks to the French beekeepers’ struggle for the ban of the automatic insecticides), Eric began working on beekeeping being immersed in the life of a beehive. His pictures were exhibited in the Orangery of the French Senate in Paris and are gathered in a first book untitled « the People of the Bees ». They are also often published in the international press. In 2007, he expanded his investigations and went worldwide to report on the relationship between men and bees (including the most archaic collection but also the industrial and commercial one) from Nepal to Cameroun, going through Russia, Argentina, Mexico, New Zealand, the USA or even Romania… His work was published in 2009 and untitled ‘The Honey gatherers’. Exhibitions were organized in photo festivals, natural history museums or botanic gardens as his pictures are witnesses of our transiting world and disclose the reasons why bees disappear.

Eric Tourneret then kept up travelling in big beekeeping traditional countries such as Slovenia, Germany and Turkey. He met the nomadic people in Ethiopia, the pygmy of the Republic of Congo, the giant bees in India and Indonesia and also the bees with no sting in Brazil and Costa Rica, and the killing bees in Panama. He discovered urban beekeeping in New York, London, Berlin or Hong Kong and the formidable Asian hornet in France, the lifelong nectar flows in Australia and the by-hand pollination in China. Those twelve years spending discovering bees and men gave rise to a beautiful book called ‘The Honey Roads’ published by Hozhoni in September 2015 and to an eponymous exhibition on the French Senate grids.

Eric Tourneret’s work has recently been exhibited at the United Nation in Geneva, Switzerland.