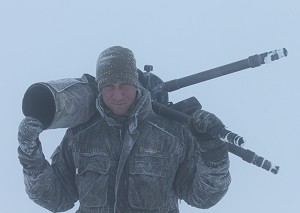 Originally from Epinal, France, Cedric Join has a PhD in sciences and has always seen nature as a tremendous thing. As soon as he learnt how to walk, everything in nature captured his interest and spending his childhood just around the Vosges and its great forest must be the reason why.

He discovered photography in the beginning of the 2000s and understood that he had just found a way to combine both arts and technics but also to share his naturalistic discoveries, first with his family, and then with the others.

Join is a self-educated photographer and his garden soon turned into his photo lab. Macrophotography, which is more accessible in every way, made him appreciate the shallow depth of field. Then, he came back to his passion for birds, even if this one is not exhaustive. He is now fond of floating blind that lets him capture very low over the water surface without disturbing the pond ecosystem.

We couldn’t end his biography without outlining his boundless admiration for the great spaces photographs and photographers, as he is crazy on minimalism and beautiful lights.