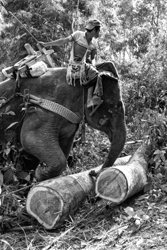 In Myanmar, elephants are playing a large part in the exploitation of precious woods. For more than 200 years, they have been carrying tree trunks from November to February, from the depths of the forest to the easy to reach truck roads. In the area of Taungoo, 350km north of Rangoon, pachyderms are still a lot being exploited for hauling.

In Mying Whai Wynn, a small village in the jungle, two hours away from Taungoo by car, mahouts of the Bamas ethnic groups are going to the forests everyday to carry teak or the rare ironwood, that is so heavy it is compared to iron (as its name implies).

This exhausting work sometimes leads to elephants to wear out. Those who don’t carry the trunks correctly are sometimes very harshly beaten by their owner who doesn’t hesitate to violently strike them. This happens well out of sight, in the depths of forests, where motorized vehicles don’t have any access. In this lookalike peaceful environment, precious woods are exacting a heavy toll to elephants, as they can suffer from hidden abuses. And this contrast creates a significant concern.

The animal, which is rigged out with a packsaddle and chains, has to supply the owner with harsh efforts to draw the trunks and extract them from a disordered mountainous area. This old-fashioned hauling is exhausted for the elephants. Mahouts don’t hesitate to beat them with the back of an axe to encourage them to work. This wild using of nature also shows the negative repercussions on smaller scales and in such unexpected places. The intensive work put a stop to the breeding of elephants as their gestation is too lengthy and represents an important shortfall for their owners. The short period of drought time while they’re working in the forest from November to February encourage mahouts to take full advantage of the animal’s strength.

This suffering is due to the poverty of those people but it’s also imposed by a society that is too dependent to consumption. That’s one more desperate situation to add to the long list of elephant’s misfortunes.