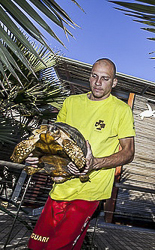 Since sea turtles have become a protected species and the trade of their meat and shell has been banned, the “Ferme Corail” in the Reunion Island, specialized in sea turtle farming for human consumption, reinvented itself in 1997 into turtle’s conservation activities. The structure named “KELONIA” grew and is now dedicated to their protection via a health care center that takes in a large number of injured turtles every week in order to heal them and release them in the ocean – after several weeks of treatment in some cases.

Kelonia is also trying to put emphasis on the general public’s awareness. That’s why a museum and aquariums with turtles from all around the Reunion seas were created. And, the turtles, which are living within the aquarium, enable the biologists to go further in their studies of those rare species that are difficult to observe in nature. When released, some turtles are thus equipped with Argos beacons thanks to which we can know their movement in the ocean better and so, refine the protection of their natural environment.