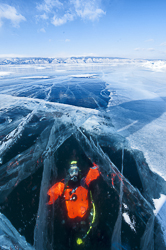 Going to the Baikal Lake is a way to follow world-famous writers and explorers’ path, such as Jules Vernes or Sylvain Tesson, and I’m not event talking of Cousteau. It is also the « crazy » dream to go and dive there, under ice, during winter.

The expedition lasts for about ten days, from Irkustsk through the Olkhon Island and the areas of Kultuk and Slyundyanka.

One regular day there begins with a huge Russian breakfast before heading to the different diving spots. Everyday, we have to dig a new hole in the ice: it makes 3 hours to localize the spot, dig the hole and set up the tents that are going to be the diver’s locker room to put on their waterproof suit. Diving lasts about 30 or 50 minutes (depending on the men frost-resistance). Back on the ground, dried and wrapped up, everybody tries to warm up with vodka and its ensured efficiency, anyway it’s a local tradition and we wouldn’t vex the Burkhan spirit.

According to the biologists, Lake Baikal is first a place full of amazing aquatic richness, including a micro fauna, giant amphipods, endemic Sculpins, and even the very famous green Spongilla that you can’t find anywhere else. It was also a way to follow those nice crazy divers who came to dive under the ice of the world biggest freshwater lake and the deeper one too, in the very middle of Siberia. But Lake Baikal is also a daily show with spectacular sunsets on the ice, natural strength that makes slabs of ice to clatter drawing and sculpting amazing things on it. This is this frozen ocean of which you can’t see the end depending on where you’re looking at, and so, the feeling to be on the edge of the world ever increased with the intense cold.

When talking about a leisure trip, going to Siberia in cold winter to dive in frozen Lake Baikal seems to be quite strange for friends and relatives. As taking a leap into darkness, this kind of trip is not regular for travellers. This experience has nothing to do with a feat, but it’s lived by divers as a personal challenge. This challenge is definitely different from regular travellers looking after heat instead of living bellow 0 degrees. When the decision is taken and everybody is there, they all follow their own personal path that urged them to make the final leap. My motivation was the reading of Sylvain Tesson’s The Consolations of the Forest: Alone in a Cabin on the Siberian Taiga that provided me the major boost to realize this old dream.

From a more technical point of view, and regarding to underwater photography, extreme cold can be a serious liability. As an example, we had to forestall the heat shock between the outside (-20 degrees) and water (1 degree maximum) that can lead to steam phenomenon within the waterproof boxes (it’s hard to figure that water is almost warm comparing to the air temperature).

The hardest to forestall and handle is the coldness while diving. My fingers suffered a lot as the gloves were more or less waterproof. After 30 minutes the pain was really hard to handle and I had to take upon myself to dive the more I could, thinking about the luck I had to dive in lake Baikal. But after 40 minutes (my longest dive), my hands kept clenching up on the waterproof box of the camera and it wasn’t even possible to shoot, as I couldn’t bear the pain anymore. I came out of the water with numb fingers the 4 times I dived.

But when the end of the trip came, apart from the reward of mythic dives, I had the huge privilege to share a bit of the Siberian life with the authentic lake’s inhabitants.