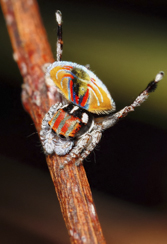 The first record of Maratus amabilis was from 1878 ,a single pinned male specimen collected in the nineteenth century and up until as recently as 2010 only seven species of Peacock Spider were known of and described. In the short period that takes us to 2016 there is now around thirty-nine known and described species, of which Project maratus has discovered four in just over twelve months. I believe through what the Project maratus team have learned so far is that many more species with new variant attributes are out there to be found.

These spiders are not an easy subject to photograph due to their size and speed of movement (they are a Jumping spider). To achieve macro clarity for identification purposes I use Canon bodies (5DMK2 and a 60D ) along with either a Canon MP-e65mm f2.8 1-5x macro lens or sometimes my Old Zeiss C/Y Vario-Sonnar 35-70 f/3.4 T* lens on macro tubes. The hardest and most important part is the lighting and diffuser, a custom made “off camera” speed light set up that sits above the end of the lens and is as close to the subject as possible along with a Godox PB960 PROPAC Power pack to power the speed light. As the subject is so small and depth of field is so narrow focus stacking can help a lot. That is if you can get enough shots off quick enough before the spider moves.